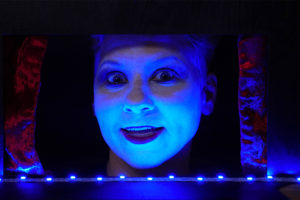 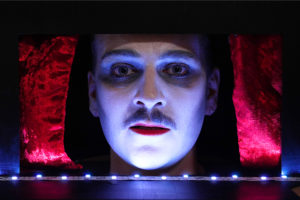 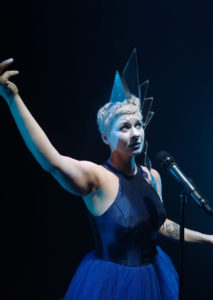 Bobby, Lunch is Darkness is a short play for video by Ali Matthews, written in collaboration with three algorithms and drawn in part from repurposed raw female dialogue from David Lynch screenplays. Lynch’s female characters are famously spectral, quasi-human creatures; what happens if we take that a step further and launch their speech into the belly of the A.I. beast?

Situated firmly at the crossroads between video, performance and internet/bot art, Bobby Lunch is Darkness presents an eerie meditation on the vanishing chasm between art and algorithm.

Ali Matthews is an artist working in performance, music and video. She is based in Manchester. She has created cabaret, one-to-one and end-on performances for venues as diverse as ArtsAdmin/Toynbee Studios, Chelsea Theatre, York Mediale, Project Arts Centre Dublin, Glogauir Studios Berlin, Lancaster Arts, Contact Theatre and Aberystwyth Arts Centre. Her gig musical The Witching Way (created in collaboration with Lancaster-based artist Leo Burtin) premiered at the Royal Exchange in 2019 and toured to venues including Lancaster Arts and Square Chapel, Halifax.

In 2019, she was selected as a Manchester International Festival Creative Lab artist, for which she created a video performance called “Bobby, Lunch is Darkness”, which  premiered on the festival’s BBC Live channel.

The Guardian has called her “a bewitching performer whose songs cling and haunt” (for the ‘Ballad of Isosceles’). She produces and project manages her own work with support from Making Room, and her projects have been consistently supported by Arts Council England.